How to mine bitcoins

Mining bitcoins is nothing else than verifying transactions within the bitcoin network. In order to prevent users from cheating and sending each other more bitcoins than they actually own, they must be some type of supervision. In the banking system it’s the responsibility of banks, but in the decentralized system users themselves must keep a wary eye on each other.

If mining bitcoins is something you’d like to do, it’s necessary you get firstly familiarized with the following terms:

The whole idea of bitcoin rests on the assumption that majority of users will not swindle. It’s therefore desirable that more than 50% of users always agree with carrying out the transaction. If some hacker wanted to send a fictitious transaction to the network, he’d have to use more than 50% of computing power of the network, to verify such a transaction. However, the computing power of the current bitcoin network is really high making any hacking attack almost impossible.

It was initially thought that transactions will be verified by any user on their PC. SHA-256 is used for calculating and hashing all individual transactions. In this way users were providing their PCs for Bitcoin, doing which, at the same time, solved the problem of distributing Bitcoin among other users. Users who were mining in this way were rewarded not just with fees for individual transactions, but also for emitting new bitcoins in the network. Distributing bitcoins is given to the user who first calculates the required hash. That’s why it was crucially important to have an adequately powerful computer so that the likelihood of being the first was as high as possible. However, it wasn’t long before it was discovered that graphics cards, thanks to their architecture, could calculate hashes much faster than the processor. That’s why this method is already ineffective today.

AMD cards were among the most suitable cards for calculating hashes. Calculating hashes was less effective in case of other manufacturers, like nVidia, for example, because they were using different architecture.  Graphic cards had been used for mining for quite a long time before they were replaced by slightly more effective FPGA circuits, which were however soon replaced with ASIC - specialized software designed for mining. When the price of bitcoin was surging, it became very attractive for hardware manufacturers who started to produce specialized hardware for bitcoin mining.  These are processors which are specially designed to have the highest performance and the lowest usage when calculating SHA-256 which is used for bitcoin mining.

Today, bitcoin mining takes place on a large scale on special farms, mostly in China, where also ASIC machines are produced. China offers low cost of electricity, abundance of the mining hardware and there’s no need to pay customs fees or VAT on hardware, as it is common in case of sending it to Europe or America. On the YouTube pages you can find a large number of videos from these farms all over the world. To be able to achieve the desired rate of generating one block every 10 minutes, the processing power of the bitcoin network needs to be somehow monitored. If the processing power of the network doubled, so would the generating of a new block. The network itself manages this problem by adjusting (either increasing or decreasing) difficulty to find new hash over a new block. The following graph shows the history of the bitcoin mining difficulty.

Bitcoin is designed in such way so that the number of newly emitted coins is gradually reduced. In 2009, when the bitcoin network was being launched, 50 new bitcoins was generated every 10 minutes. After 4 years this number halved and between 2012 and 2016 only 25 new bitcoins was generated every 10 minutes. Since 2016, the network has been growing only by 12.5 bitcoins/10 minutes and in another 4 years this number will be halved. The reduction will continue up until 2140, when there will be nothing left to divide. However, the vast majority will be depleted already in 2030. The following graph shows how many bitcoins will be mined in which year. 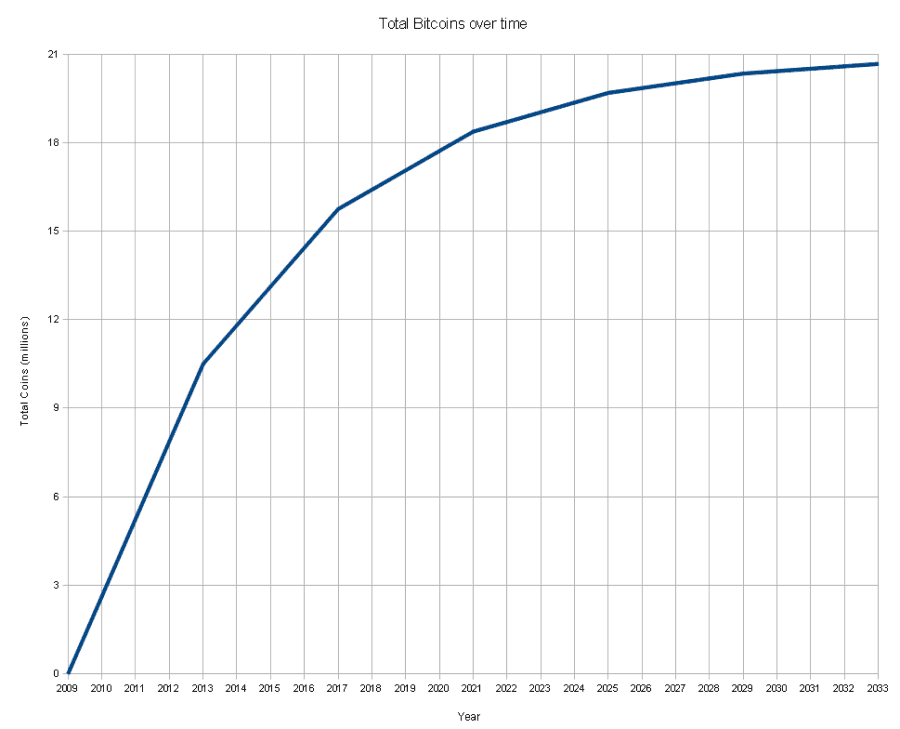 As the result of the vast number of miners in the bitcoin network and the consequent minimal probability of finding the correct hash over a block, the miners started to unite into so called mining pools, where they try to find the correct hash collectively, as a team. If somebody manages to find new bitcoins, he shares them with the others according to the amount of the computational capacity they provide to the pool. The graph showing the bitcoin mining pools (as of August 2016)

A Czech computer programmer Marek Slush Palatinus came up with this idea and released this protocol as open-source. His pool can be still accessed on this web: slushpool.com.

There is a great deal of software for bitcoin mining, therefore we recommend to focus on the pool which you will use for mining. They will help you with choosing and configuring the software you need. The most frequently used however are: MinePeon, EasyMiner, BFGMiner nebo CGMiner

Bitcoin uses SHA-256 for encryption. This is, however, not the only method used and new alternatives are available.

Today, it’s very difficult to make profit on mining bitcoin or any other currency, but it’s not entirely impossible. You can calculate your profitability on the Coinwarz website.

Manufacturers of the ASIC mining hardware

Technologies Ltd.- one of the largest Chinese producers of ASIC miners. Its ASIC miners (AntMiner) are among the most widely used. They’re sold in more than 100 countries in the world. One of the first companies manufacturing ASIC. However, this company didn’t enjoy success for long because it was cheating its customers. They were charging their customers for software that was still being developed. But they couldn’t complete the software in time and were beaten by their competitors. They’re currently experiencing financial problems. This company firstly focused on manufacturing the ASIC hardware. It was using mining machines like KnCMiner Jupiter, KnCMiner Saturn, etc. Later on, it shifted its focus from selling hardware to producing its own mining farms. This company firstly focused on manufacturing the ASIC hardware. This company manufactured ASIC hardware. It went bust in 2015. Current table manufacturers can be found at Bitcoin Wiki